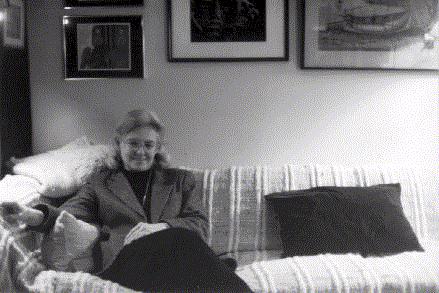 I was born in 1948 in Saalfelden, District of Salzburg, Austria. My parents brought me and my four brothers and sisters to Chicago, Illinois, in January of 1954. My early education, in school and out, occured there. By grade six I was walking home from school and sitting on mailboxes with an older man; Ken was in grade eight. We married in 1966. Two years later, under pressure from the Vietnam War, we emigrated to Toronto, Ontario, Canada.  The happiest event of those early years in Toronto was the birth of our son, Christiaan, in 1970.

The following year, Ken accepted a job in the psychology department of Nipissing University in North Bay, a small city about 400 k. north of Toronto.  In 1978, our daughter, Katherine, was born. Ken continued teaching, but his main interests were in literature and art. He spent his time writing (a novel and several books of poetry followed) and publishing a small literary magazine called Nebula. I spent my time immersed in the incredible beauty of my children's unfolding life.

When Katherine was still a toddler, I returned to University, at first taking only courses which particularly interested me (primarily literature, history and philosophy). As I began to approach the number of credits required for graduation, however, I decided to look at the requirements for a B.A. Not wanting to be done with school, I went to Teacher's College. Not gaining a permanent job, I returned to school for my Master's degree in history. Besides the course work required, I had great fun researching and writing a thesis on Ernest Jones, an important member of the Chartist Movement.

Since 1994, I have been employed at Nipissing University, where I lecture in the departments of philosophy and classics.  Our aging house continues to shelter us from wind and rain; our perennial garden annually rewards us for work done years before; our jobs allow time for reading, studying and travel; our new, old VW camper van promises to take us to new adventures and our children, surely life's greatest reward, continue to amaze us, not only with their accomplishments, but also with their warmth and their intellectual curiosity.  Life continues good.

Back to Ursula's Home Page